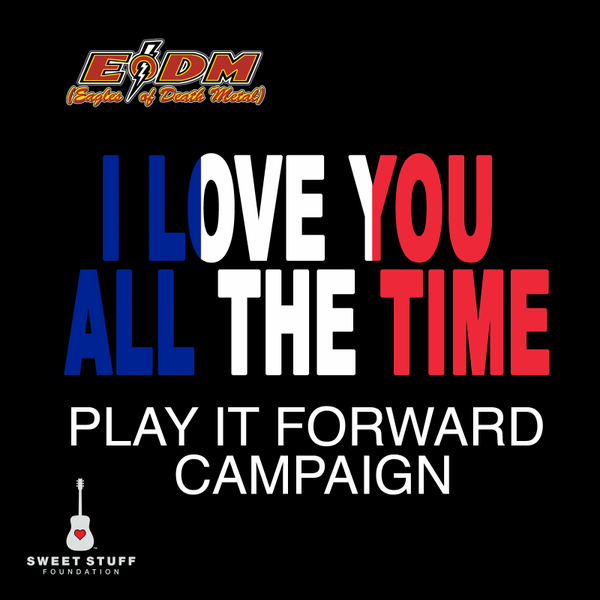 EODM ANNOUNCE ROUND 3 OF PLAY IT FORWARD CHARITY COVERS

ELTON JOHN, BECK TEAMED WITH MEMBERS OF THE STROKES & MORE LAUNCH THIRD WAVE OF COVERS OF EODM’S “I LOVE YOU ALL THE TIME” AVAILABLE TODAY

Artists Covering The Song As Well As iTunes, Amazon, Spotify and TuneCore To Donate Their Proceeds To The Sweet Stuff Foundation

Eagles Of Death Metal has announced the release of the third round of the Play It Forward EODM Campaign that debuted December 18, 2015 with its first helping of covers of “I Love You All The Time” from the band’s current album Zipper Down.

As before, the band pledges to donate 100% of its publishing income from every cover sold to The Sweet Stuff Foundation, the non-profit organization founded in 2013 by EODM co-founder Joshua Homme to provide assistance to musicians and their families in times of need, as well as musical education and gear for the next generation. Participating artists were once again asked to donate the money generated from sales of the song to the charity. iTunes, Prime Music, Spotify and TuneCore Digital Distribution are also donating proceeds in participating markets.

In the weeks that followed, Eagles Of Death Metal asked artists the world over to cover “I Love You All The Time,” pledging to donate 100% of its publishing income to The Sweet Stuff Foundation. With invaluable support from TuneCore, the first wave of “I Love You All The Time” renditions were made available, with contributions from artists as diverse as Florence + The Machine (featuring The Maccabees), Kings Of Leon, Savages, My Morning Jacket, Imagine Dragons, Jimmy Eat World, the Dean Ween Group and more. On January 22, 2016, a second wave was released, with versions from Matt Cameron, Petra Haden, Nada Surf, Chelsea Wolfe and a dozen others.

And now a third round of covers is available. Contributions from none other than Elton John as well as a special collaboration from The Strokes’ Fabrizio Moretti and Nick Valensi featuring Beck—the full list of participants in alphabetical order is:

Those wishing to donate should go to http://playitforwardeodm.com for information on how to do so.

With cooperation from Fondation de France:www.fondationdefrance.org and FENVAC: www.fenvac.org, Play It Forward EODM Campaign donations to Sweet Stuff will aid the surviving family members of those killed in the November 13 Paris attacks—as well as the family of slain EODM crew member Nick Alexander. For more information on The Sweet Stuff Foundation, go to www.thesweetstufffoundation.org.