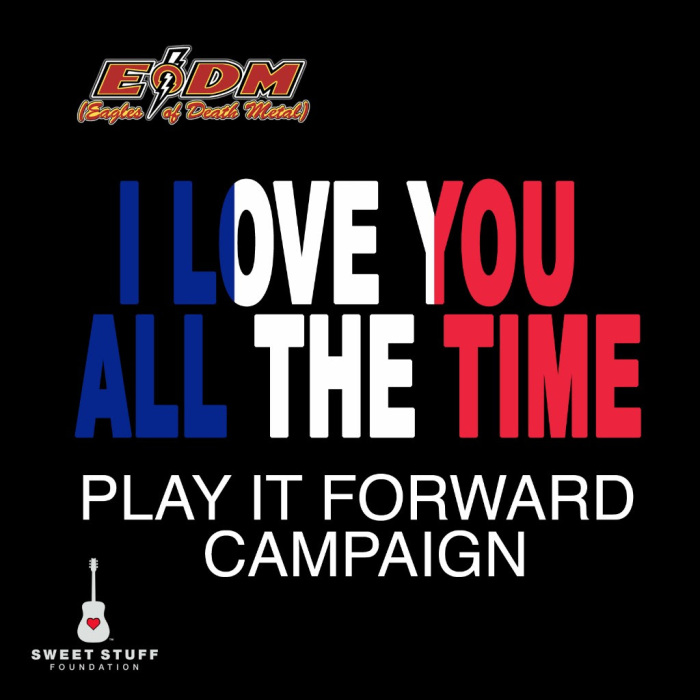 Artists Covering The Song As Well As Amazon, Apple, Spotify and TuneCore Distribution to Donate Their Proceeds To Friends of Fondation de France. http://playitforwardeodm.com/

In the aftermath of the horrific and senseless terrorist attacks on Paris on November 13, 2015—in which so many innocent lives were taken at that evening's Eagles Of Death Metal show at Le Bataclan—it was none other than Duran Duran who reached out with an immediate and sincere act of musical solidarity: In response to a fan-led campaign to push Eagles Of Death Metal’s cover of Duran Duran’s classic “Save A Prayer” to #1 in the UK, Simon LeBon tweeted that the new romantic icons would donate their share of royalties from the track to charity. In the weeks that followed, Eagles Of Death Metal asked its musical family to extend the victims of the Paris attacks the same kindness and compassion that everyone from the members of U2 to the French authorities had shown the band—to join the Play It Forward EODM Campaign. EODM asked artists the world over to cover “I Love You All The Time” from its current album Zipper Down. For every cover sold, the band pledged to donate 100% of its publishing income to The Sweet Stuff Foundation, the non-profit organization founded in 2013 by EODM co-founder Joshua Homme to provide assistance to musicians and their families in times of need, as well as musical education and gear for the next generation. Participating artists were also asked to donate the money generated from sales of the song to the charity.

This week, Eagles Of Death Metal is overwhelmed with gratitude by the generosity and empathy made manifest in the first wave of “I Love You All The Time” covers being released by the following artists, all of whom are donating any royalties due them for these performances. The full list of the first series of confirmed Play It Forward EODM Campaign participants is in alphabetical order:

FLORENCE + THE MACHINE (FEATURING THE MACCABEES)

Extending their appreciation beyond their fellow musicians, Eagles Of Death Metal thanks Amazon, Apple, Spotify and TuneCore Distribution for joining the Play It Forward initiative in donating their proceeds from these covers to Friends of Fondation de France in participating markets.

Homme commented on the Play It Forward EODM Campaign and this first showing of camaraderie: "I made a plea to artists and business people alike to come together to use our solidarity as proof that we are stronger together, and that we can make a difference. We are proud to be a little part of such a big group of talent and good will. We can’t thank these artists enough for their donations of talent, love, time, and compassion. Now, the Play It Forward Campaign is in the hands of the fans to help us make a difference, and to help those affected by this tragedy. Please listen, purchase, play, and enjoy – and know that every time you do, you’re doing the sweet stuff that makes that difference."

Additional versions are forthcoming and will be announced as they are confirmed. Those wishing to donate should go to playitforwardeodm.com for information on how to do so.

The covers are available today on iTunes, Prime Music and Spotify. Additional versions are forthcoming and will be announced as they are confirmed. Those wishing to donate should go to http://playitforwardeodm.com/ for information on how to do so.

EODM offers up further gratitude to Pearl Jam and drummer Matt Cameron, who are contributing two covers--Pearl Jam’s live version of “I Want You So Hard" (Recorded at Estadio Maracanã, Rio de Janeiro) and Matt Cameron "I Love You All The Time”—to the Play It Forward cause. A digital bundle of both songs—and a vinyl version pre-order—go live at 9am PT on Friday, December 18 at www.pearljam.com,  with all proceeds going to The Sweet Stuff Foundation. Pearl Jam’s Matt Cameron explains: “After reading Josh Homme’s email encouraging fellow musicians to cover EODM’s 'I Love You All the Time,' I was very inspired to act quickly, so I recorded a version on a night off from tour in Mexico City in my hotel room, 11-27-2015, 8pm-12am. I am honored to be a part of this movement of unity and support. We’ll never stop.”
With cooperation from Foundation de France: www.foundationdefrance.org and FENVAC www.fenvac.org, Play It Forward EODM Campaign donations to Sweet Stuff will aid the surviving family members of those killed in the November 13 Paris attacks—as well as the family of slain EODM crew member Nick Alexander. For more information on The Sweet Stuff Foundation, go to thesweetstufffoundation.org.


Finally, it was confirmed earlier this week that Eagles Of Death Metal will return to Europe for the first time since its triumphant appearance during U2’s encore December 7th in Paris. The first run of rescheduled dates—now christened The Nos Amis Tour—will include a February 16th show at the Olympia in Paris. “The people of Paris have always been incredible to us, and our feeling of love towards this beautiful city and its people has been reinforced a million times over this past month,” commented EODM co-founder and frontman Jesse Hughes. "Hearing the stories of the survivors, the injured and those who have lost loved ones has been overwhelming. Not returning to finish our set was never an option. We look forward to coming back in February and continuing our mission to bring rock ‘n’ roll to the world.”