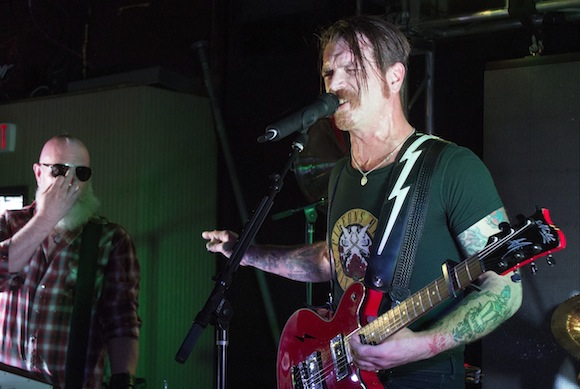 One does not simply "rock out" at an Eagles of Death Metal show. Such an occasion is a supercharged sex-rock spectacle of the finest ass-shakin' regard, where the boys don't ever seem to mind that their girls are squealing with titillated desire for more of frontman Jesse "Devil" Hughes strut-rock charms. It's a beautiful thing, and made for an unforgettable day of kickass music last week at CraveOnline's SXSW music showcase in Austin, TX.

After some highly impressive sets from Blondfire and Mowgli's packed Rusty's with music lovers at CraveOnline's day party (read our full-day recap), headliners Eagles of Death Metal took the stage to a roaring welcome. With three albums of swagger, flash and more than a few sexually suggestive metaphors under their belts, this aint Spinal Tap spoof-rock, but rather good-humored lusty fun with a signature strut-and-smirk style. Imagine the Rolling Stones' hit "Brown Sugar" used as a template for orchestrating infectious rock n' roll in the modern age. In the able hands of the proper musical alchemist, true magic can occur – and lucky for us, that mad scientist knows how to party with the best of 'em.

EODM's performance was the perfect pinnacle to a tremendous day of music that also saw performances from Low Volts, The Mowgli's, A Silent Film and Rocketboys, among others. Kicking off with the hi-octane "I Only Want You" from the band's Peace, Love, Death Metal album, Hughes delivered a powerful dose of his sex-charged tongue-in-cheek ’70s swagger pastiche through funktified versions of fan favorites including "Secret Plans," "Cherry Cola," "I Only Want You" and more.

Guitarist Dave Catching, sporting some punk rock Santa facial hair, delivered his typically shredding riffery in effortless fashion as Brian O'Connor held the buoyantly thunderous low end on bass as well, a modern miracle given that the man was fighting a hard cancer fight two years ago. Ween drummer Claude Coleman sat in on drum duties to the extreme delight of more than a few onlookers, deftly filling a position previously held by former Queens of The Stone Age drummer Joey Castillo and, originally, QOTSA frontman Joshua Homme. The typically snappy, jagged percussion had an added swing this time thanks to Coleman, who changed the dynamic of the band's sound just enough to bring a fresh feel to songs this superfan has heard live dozens of times.

Even the heartbreaker love jam "Now I’m A Fool" was given a mood boost, as Hughes lamented learning a hard lesson of the heart for taking off the aviators and letting down his guard. "I put down my guns / And then you went Hollywood on me / Now I’m a fool / I feel like the whole world knows / And I just can’t escape it."

Check out EDOM's classic jam "I Want You So Hard" from CraveOnline's SXSW showcase!

EODM ended their set with "Speaking in Tongues," a squealing-mean riff-off that found Hughes and Catching on opposite sides of the stage, toes over the edge, trading licks through the mid-afternoon Austin haze, occasionally throwing back to O'Connor for a fill, giddy grins all around at having owned the day once again.

Check out Crave's full gallery of the performance here.